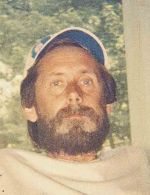 James Stone has been called “Squeakie” for as long as he can remember.

When he was growing up the family moved every few years and so because his father was a sharecropper and carpenter. They moved to where the work was.

Squeakie started “handing” tobacco (passing the leaves on to a worker who strung it for drying) when he was five or six years old. As he got older, he was involved in all aspects of the operation…from pulling plants, setting tobacco hoeing & cropping. He also picked cotton!!

He worked in a few factories and grocery stores over the years and then began working as a house painter about 35 years ago.

His uncle Henry “Squirrel” Stone had been painting folk art for nearly 20 years when he suggested to Squeakie that he try his hand at painting a picture of a church from a photograph. The picture was for a woman who’d commissioned it from his uncle. Squeakie had always felt that there was something else that he was meant to be doing but had never worked out what it was until that day.

When he painted that first picture he knew this was it!

SORRY NOTHING AVAILABLE AT THIS TIME...CHECK BACK