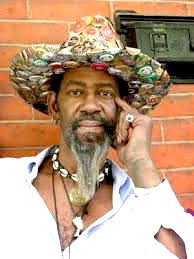 The third child in a family of nine, Warmack grew up in the Chicago area and had no formal training as an artist, though he began making art objects in his childhood  In the 1970s he made and sold art at street fairs..

While in Chicago in 1978, he was shot in the stomach during a mugging and lapsed into a coma. During his hospitalization, he had a spiritual vision which he described as "very peaceful, almost as if I was traveling through history and looking at ancient civilizations.  The incident spurred Warmack to renew his focus on art and broaden his scope, and shortly afterwards he began using the name Mr. Imagination.

In the 1970s and 1980s, Mr. Imagination worked extensively in sculptures carved from industrial sandstone and incorporating thousands of bottlecaps  fastened to surfaces of the sculpted objects.  He used paint, wood, nails, putty, and cement, and also incorporated found objects into his work, including vintage commercial items and discarded objects such as tools, household instruments, and mirrors. Many of his works were thematically influenced byAfrican and Egyptian masks and dress.

Mr. Imagination's first solo exhibition was assembled in 1983 at the Carl Hammer Galleries in Chicago. He lived and worked in Chicago until 2001, when he relocated to Bethlehem, Pennsylvania. There he contributed pieces to Lehigh University's campus and the Zoellner Arts Center, worked with the Bethlehem Fine Arts Commission, and hosted workshops for children. In January 2008 his home and most of his artwork was destroyed in a fire, and shortly thereafter he moved to Atlanta, GA. He continued working and exhibiting in Atlanta until his death from a blood infection in 2012 at age 64.

We originally met Mr I at Folk Fest in Atlanta 10-12 years ago.