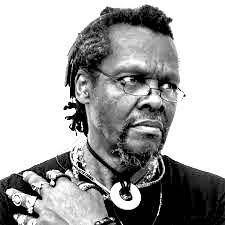 Lonnie Bradley Holley, sometimes known as The Sand Man (born February 10, 1950 in Birmingham, AL), is an African-American artist, art educator, and musician. He is best known for his assemblages and immersive environments made of found materials. He was born the 7th of 27 children during the Jim Crow era. He claims to have been traded for a bottle of whiskey when he was four.   From the age of five, he worked various jobs: picking up trash at a drive-in movie theatre, washing dishes, and cooking

Holley began his artistic life in 1979 by carving tombstones for his sister's two children, who died in a house fire. He used blocks of a soft sandstone-like byproduct of metal casting which was discarded in piles by a foundry near his sister's house. He believes that divine intervention led him to the material and inspired his artwork. Inspired to create, Holley made other carvings and assembled them in his yard along with various found objects. In 1981, he brought a few examples of his sandstone carvings to Birmingham Museum of Art director Richard Murray. The BMA displayed some of those pieces immediately[3] and Murray introduced him to the organizers of the 1981 exhibition "More Than Land and Sky: Art from Appalachia" at the Smithsonian American Art Museum. Soon his work was being acquired by other institutions, such as the American Folk Art Museum in New York and the High Museum of Art in Atlanta. His work has also been displayed at the White House.