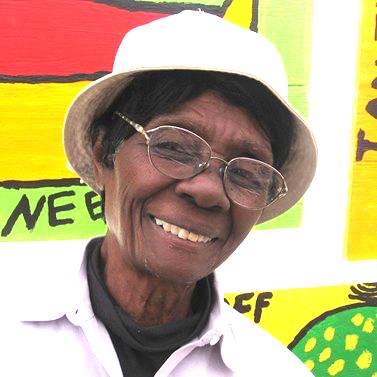 Ruby Williams is a very special friend of ours. We always looked forward to seeing her at the Folk Fest shows in Atlanta each August but since she quit traveling, we still stay in touch with her through snail mail.

She lives in Plant City Florida and has a roadside Produce Stand and “Stop In” Gallery, that she has operated for years.

Ruby’s main calling in life is as a Missionary to spread the Gospel of Christ.

She holds workshops at schools, museums, galleries and at her Produce stand.

She is represented in several folk art galleries and has illustrated a childrens book called “Hi, I’m Ruby.”